To truly understand the IT industry, it is wise to study the male peacock. He struts around with his elaborate tailfeathers, which neither help him fly nor fight. They simply act as a social signal, that this individual controls such a surplus of resources that he can afford to be ostentatious. 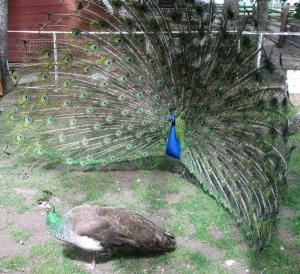 Java sneaks up on an unsuspecting developer

Exactly the same dynamic operates in the enterprise software world, due to the same quirk of human evolutionary psychology. The choice of Java, for example, is validated by fact that its users (or rather, their organizations) can afford gigabytes of main memory and thousands of pounds worth of WebLogic licenses (multiplied by features, users)… just to retrieve a record from a database and display it on someone’s screen. Or get some input from the user and store it in a database. The same things that corporate applications have always done, since back in the day of green screens, mainframes and programs that fit into 4k blocks on TPF or CICS. It’s why so much “new” technology is really just another solution to an already solved (or nonexistant!) problem, but needing 10× or 100× the power to run. And it’s only getting worse.

My ego operates in the opposite direction; I get off on how much I can get done with how little memory or CPU, or lines of code. Which is no less pathological I freely admit: I am certain I waste† lots of time on microoptimization which often just isn’t worth it given that there is an abundant surplus of power in many cases‡. But at least I am aware of it…

And don’t get me wrong, I love progress. I just don’t think reinventing the wheel is it! And nor is wasting power just because you have it. Think what we the industry could accomplish with modern hardware and old-school programming!

† When we really are constrained by machine speed, that’s when it starts to get interesting. HFT for example.
‡ Since every server-class machine you can buy is sized as if you want to run Java on it!

Jus' a good ol' boy, never meanin' no harm
View all posts by Gaius →
This entry was posted in Random thoughts. Bookmark the permalink.